Home > Beer making > Glossary of Terms
This list of beer and brewing words, terms and acronyms is not definitive, and there are plenty of great books on brewing if you are after more detailed information, but it is a handy quick reference. 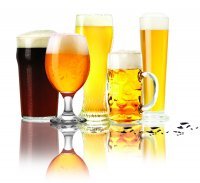 ABV
Alcohol By Volume is also known as ABV and is the alcoholic strength of a brew measured as a % part in relation to the liquid as a whole.

Acetaldehyde
Green apple aroma which is a byproduct of fermentation.

Adjunct
Fermentable material used as a substitute for traditional grains, to make beer lighter-bodied or cheaper.

Aerobic
An organism, such as top fermenting ale yeast, that needs oxygen to metabolize.

Ale
A beer brewed from a top-fermenting yeast with a relatively short, warm fermentation.

All-malt
This term refers to a beer made exclusively with barley malt and without the use of adjuncts.

Alpha Acid Units (AAU)
A home brewing measurement of hops that quantifies the amount of alpha acids (bittering agents) going into the beer before fermentation. Equal to the weight of hops in ounces multiplied by the percent of Alpha Acids.

Amber
Any top or bottom fermented beer having an amber color, that is, between pale and dark.

Attenuation
The degree of conversion of sugar to alcohol and carbon dioxide.

Barley
A cereal grain that is malted for use in the grist that becomes the mash in the brewing of beer.

Beer
Any alcoholic beverage made by fermenting malted barley and flavoured with hops.

Bitterness
The perception of a bitter flavour, in beer from iso-alpha-acid in solution (derived from hops). It is measured in International Bitterness Units (IBU).

Body
Thickness and mouth-filling property of a beer described as "full or thin bodied".

Bottle-conditioning
Secondary fermentation and maturation in the bottle, creating complex aromas and flavours.

Brew Kettle
The vessel in which wort from the mash is boiled with hops. Also called a copper.

Bung
The stopper in the hole in a keg or cask through which the keg or cask is filled and emptied. The hole may also be referred to as a bung or bunghole.

Carbonation
The sparkle caused by carbon dioxide, either created during fermentation or injected later.

Caramel
A cooked sugar that is used to add color and alcohol content to beer. It is often used in place of more expensive malted barley.

Caramel malt
A sweet, coppery-colored malt. Caramel or crystal malt imparts both color and flavor to beer. Caramel malt has a high concentration of unfermentable sugars that sweeten the beer and, contribute to head retention.

Chill haze
Cloudiness caused by precipitation of protein-tannin compound at low temperatures, that does not affect flavour.

Clovelike
Spicy character reminiscent of cloves; characteristic of some wheat beers, or if excessive, may derive from wild yeast.

CO2
The formula for Carbon Dioxide.

Cold Break
Proteins that coagulate and fall out of solution when the wort is rapidly cooled after the boil.

Conditioning
An aspect of secondary fermentation in which the yeast refine the flavours of the beer. Conditioning continues in the bottle. Warm conditioning further develops the complex of flavours. Cold conditioning imparts a clean, round taste.

Conditioning Tank
A vessel in which beer is placed after primary fermentation where the beer matures, clarifies and, is naturally carbonated through secondary fermentation. Also called bright beer tank, serving tank and, secondary tank.

Diacetyl
A volatile compound in beer that contributes to a butterscotch flavor, measured in parts per million.

DMS
Taste and aroma of sweet corn; results from malt, as a result of the short or weak boil of the wort, slow wort chilling, or bacterial infection. -- Dimethyl sulfide, a sulfur compound.

Dosage
The addition of yeast and/or sugar to the cask or bottle to aid secondary fermentation.

Draught
The process of dispensing beer from a bright tank, cask or, keg, by hand pump, pressure from an air pump or, injected carbon dioxide inserted into the beer container prior to sealing.

Dry-hopping
The addition of dry hops to fermenting or aging beer to increase its hop character or aroma. Enzymes Catalysts that are found naturally in the grain. When heated in mash, they convert the starches of the malted barley into maltose, a sugar used in solution and fermented to make beer.

Fermentation
The conversion of wort to beer, defined here as three parts, Lagtime, Primary, and Secondary.

Fining
A substance attracting particles that would otherwise remain suspended in the brew.

Filter
The removal of designated impurities by passing the wort through a medium, sometimes made of diatomaceous earth (made up of the microscopic skeletal remains of marine animals). Yeast in suspension is often targeted for removal.

Fruity/Estery
Flavor and aroma of bananas, strawberries, apples, or other fruit; from high temperature fermentation and certain yeast strains.

Gravity
Like density, gravity describes the concentration of malt sugar in the wort. The specific gravity of water is 1.000 at 59F. Typical beer worts range from 1.035 - 1.055 before fermentation (Original Gravity). The finished beer gravity (FG) will range from 1.005 - 1.015, depending on the OG and type of yeast. Also referred to as Specific Gravity.

Hop back
Sieve-like vessel used to strain out the petals of the hop flowers.

Hoppy
Aroma of hops, does not include hop bitterness.

Hops
Herb added to boiling wort or fermenting beer to impart a bitter aroma and flavor, and balance the sweetness of the malt sugar. The dried cones are available in pellets, plugs, or whole.

Hot Break
Proteins that coagulate and fall out of solution during the wort boil.

Hydrometer
A direct-reading instrument for indicating the density and other characteristics of liquids including alcohol content for beer.

Infusion
Simplest form of mash, in which grains are soaked in water. May be at a single temperature, or with upward or (occasionally) downward changes.

IBU
International Bitterness units. A system of indicating the level of hop bitterness in finished beer.

Krausen (kroy-zen)
Used to refer to the foamy head that builds on top of the beer during primary fermentation. Also an advanced method of priming.

Lager
A beer brewed from a bottom-fermenting yeast and given a long cool fermentation.

Lagtime
The period of time from pitching the yeast until primary fermentation is evident. The lagtime should preferably be less than 12 hours.

Length
The amount of wort brewed each time the home brewery is in operation.

Malt
The foundation ingredient of beer.

Malt Extract
The condensed wort from a mash, consisting of maltose, dextrins and, other dissolved solids. Either as a syrup or powdered sugar, it is used by brewers, in solutions of water and extract, to reconstitute wort for fermentation.

Malting
The process by which barley is steeped in water, germinated ,then kilned to convert insoluble starch to soluble substances and sugar.

Mash (Verb)
To release malt sugars by soaking the grains in water. (Noun) The resultant mixture.

Mouthfeel
A sensation derived from the consistency or viscosity of a beer, described, for example as thin or full.

Original gravity
A measurement of the density of fermentable sugars in a mixture of malt and water with which a brewer begins a given batch.

Phenolic
The aroma and flavour of medicine, plastic, Band-Aids, smoke, or cloves; caused by wild yeast or bacteria, or sanitiser residue.

Pitching
Term for adding the yeast to the fermenter.

Primary Fermentation
The high activity phase marked by the evolution of carbon dioxide and krausen. Most of the attenuation occurs during this phase.

Priming
The method of adding a small amount of fermentable sugar prior to bottling in order to give the beer carbonation.

Racking
The careful siphoning of the beer away from the trub.

Secondary Fermentation
A period of conditioning and settling of the yeast after primary fermentation and before bottling.

Shelf life
Describes the number of days a beer will retain its peak drinkability. The shelf life for commercially produced beers is usually a maximum of four months. Home brews are usually much longer.

Sparge
To spray grist with hot water in order to remove soluble sugars (maltose). This takes place at the end of the mash.

Trub (trub or troob)
The sediment at the bottom of the fermenter consisting of hops, hot and cold break material, and dormant (sometimes dead) yeast.

Wort (wart or wert)
The malt-sugar solution that is boiled with hops prior to fermentation.

Yeast
A micro-organism of the fungus family.

Yeasty
Yeast-like flavour as a result of yeast in suspension or beer sitting too long on sediment.

Zymurgy
The science of brewing and fermentation.